Hands down, the Star Wars Rebel Challenge event was one of the best things I have ever done. Every moment felt like a magical vacation and I may have had to choke back tears when I returned to reality Sunday night.

My running buddy and I left bright and early on Thursday morning to check in to the Grand Californian before the expo started. This hotel is breathtaking – if you’ve never peeked inside, do yourself a favor and do just that the next time you walk by. Although I didn’t mind the 20 minute walk to Downtown Disney when we stayed off property for Avengers, it was probably because I wasn’t able to compare it to the experience of stepping out of your hotel and being right there. Amazing.

The Grand Californin lobby is stunning

On the drive up I started reading posts from friends who had been standing in line for the expo as early as 6 am! We walked over just as it was starting at 10. I was very happy with the organization and speed of packet and pre-order merchandise pickup. We collected our haul, had our pictures taken for the Rebel Challenge verification, and headed upstairs. The wait for the official runDisney merchandise area at this point was an hour and a half, but here is where I was most impressed. We were immediately given a wristband and brought upstairs to a ballroom to wait. There were organized lines mapped out on the floor with masking tape so we were able to sit and rest our legs. Between watching Star Wars movies on the big projection screen, talking to other runners around us, and pouring over our packets and pre-registration goodies, the time passed quickly. When it was our turn we were walked to the official merchandise area and had our wristbands removed. Inside was crowded but not unmanageable. There was plenty of merchandise at that point (although it went quickly that day) and we only waited a minute to pay at one of the 30 or so cash registers that I counted. I am a very patient person, as long as the wait is calm and organized. Cheers to runDisney and everyone who helped make this a great experience as opposed to some of the horror stories I have heard about past expo chaos! Of course the other side of the expo didn’t disappoint and we spent another hour or so shopping and talking to vendors.

I forgot to take an expo photo, so here’s my favorite from Star Tours!

We had the rest of the afternoon to leisurely take in the sights and eat before getting ready for the Wookie Welcome party. For some reason I started to doubt my Darth Vader bounding outfit at the last minute and changed, but I wish I hadn’t because there were people of all ages in full costume waiting in line. The welcome party went from 10-12, and with no prior experience with a pasta in the park or a similar after hours party I didn’t know what to expect at all. What shocked me the most was that immediately upon entering the lines were very long – not for the food (a small but delicious selection of desserts and non-alcoholic beverages) or the rides (the party took place in Tomorrowland and just about everything there was open), but for character pictures! My running buddy and I must be in a minority here, because pictures with characters just aren’t high on our priority list. Instead we took full advantage of literally no wait times and alternated between Space Mountain, Star Tours, and Astro Blasters. After the third round on Space Mountain we stopped for food and to watch the almost empty dance party. Over the course of the weekend I heard a lot of complaints about the Wookie Welcome Party, primarily that people waited two hours in line to get one character picture. Well, I guess it all comes down to preferences and priorities because we had an absolute blast.

Friday morning was the 5K which we did not participate in. Originally I thought I would regret this decision, but it ended up being just perfect since we were able to stay up late at the welcome party, have a nightcap on the balcony, sleep in, and enjoy a very lazy day. I’m guessing I will stick to this plan of skipping the 5K for future runDisney races (with the exception of Dopey someday, of course). If I had an Annual Pass I probably would have dropped in to the parks for a ride or two but I am waiting until next year to purchase one.

The 10K on Saturday was my first race of that distance. I know many people love races at Disneyland for the ability to sleep in and walk to the corrals late, but I have no problem getting up early and I wanted to be up towards the front. I really went all out with my Padme costume and I was thrilled with how it turned out. I know that I spent more time beading the headpiece than most runners spend picking out their entire outfit, but it was so worth it. Originally the plan was to meet up with a few other Padmes from my running costume group for a picture but we were all thrown off by the location of the start. After completing two Disneyland races I now know my way around pretty well and would not make that mistake again. 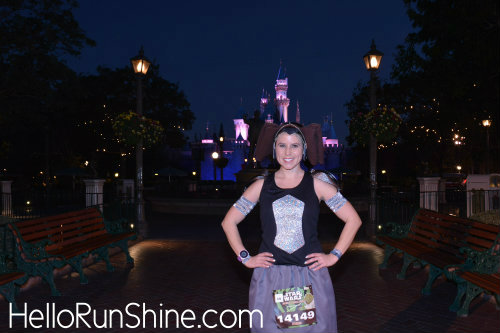 If running through the parks is your top reason for running Disney the Star War 10K is the perfect race for you. Just over four miles are inside Disneyland and California adventure. I didn’t take headphones because I wanted to soak up every sight and sound (I especially loved the purple lights and Darth Vader soundtrack in the underpass and the morning sun hitting the “cliffs” in Cars Land). Unfortunately my only bad moment of the entire weekend did happen during the 10K. I had made the decision that I would try and stop for one character photo after feeling confident from Avengers that they would cut off the lines if they felt the wait would put you too close to the 16 min pacers. When I saw Darth Vader I knew that was my one stop. The Cast Members told us that the wait was about 30 minutes (crazy, right?), and although we wouldn’t be able to stop for additional pictures we should be fine. As I waited I watched dozens of other people get in line behind me and figured they would all be safe too. Thirty some minutes and a few people left until Darth Vader bike pacers appeared and warned us that we were behind pace! I was stunned for a second and distinctly remember thinking I was capable of a sub-two half yet here I was about to be swept at a Disney race. I didn’t think twice. I booked it out of there so fast, practically sprinting out of the park and past the fabled balloon ladies (hopefully the only time I’ll ever see them) until I was safe. This experience on its own wouldn’t have been too bad, except that while I was waiting in line I realized that the woman behind me was a corral cheater with an A bib. I won’t go in to details here about that or how I figured that out (please feel free to message me if you would like to know more), but for someone like me who can’t cut a line to join a friend without feeling terrible it really put a bad taste in my mouth. Between all that craziness and walking out of the finish area only to realize that my medal was badly damaged I needed a moment to regroup and regain some Disney magic.

I let myself be annoyed for exactly one minute before letting it all go. I was so incredibly lucky and grateful to be there in the first place and I wasn’t about to let anything change that. I wish more people would take that approach before immediately broadcasting their displeasure on social media. Oh, and runner relations replaced my medal later that afternoon without any issue. If you ever have problems during a race weekend do not hesitate to seek them out. Saturday afternoon was a mix of activity (switching our room back to the off-property Castle Inn & Suites since we couldn’t get a reservation for the last night at the Grand Californian) and relaxation (beer flight tastings at the UVA Bar in Downtown Disney, my favorite). We decided to keep our pre-half dinner tradition at Ralph Brennan’s Jazz Kitchen and go to bed early at 8:00. 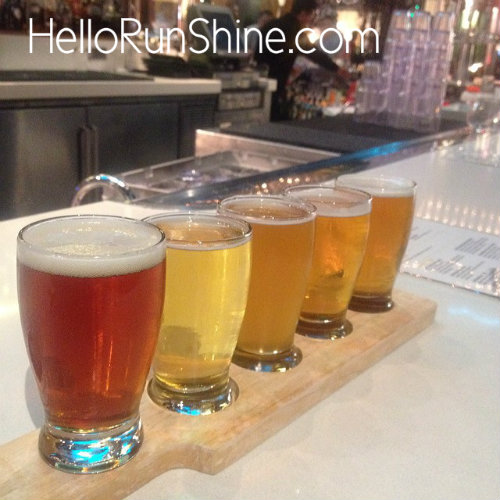 Contrary to Avengers the weather for the Star Wars half was cloudy, cool, and calm. Like the 10K the day before there was an increased amount of time inside the parks. Highlights included multiple Storm Trooper sightings, stopping by the big waterfall in California Adventure for pictures, and getting to run down Main Street in Disneyland while it was still somewhat dark outside. By the time we hit the streets of Anaheim around mile six the crowds were out in full force. Marching bands, cheerleaders, people sitting outside their houses in bathrobes, and the incredible 501st Legion lined most of the course. Here’s a great tip if you are running Star Wars from a lower corral and are worried about your time: save your “character pics” for outside the park and the outstanding cosplayers  who are more than happy to pose with you. I actually didn’t stop for any pictures at this point because I was hurting a little bit and ready to be done. I was all smiles at the finish line though and happy to be able to experience the full post-race party (it was cut short at Avengers due to high winds). 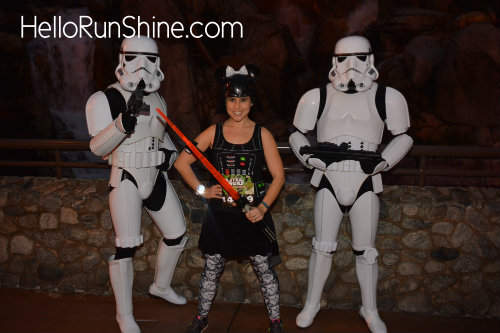 I’m a dark side kind of girl 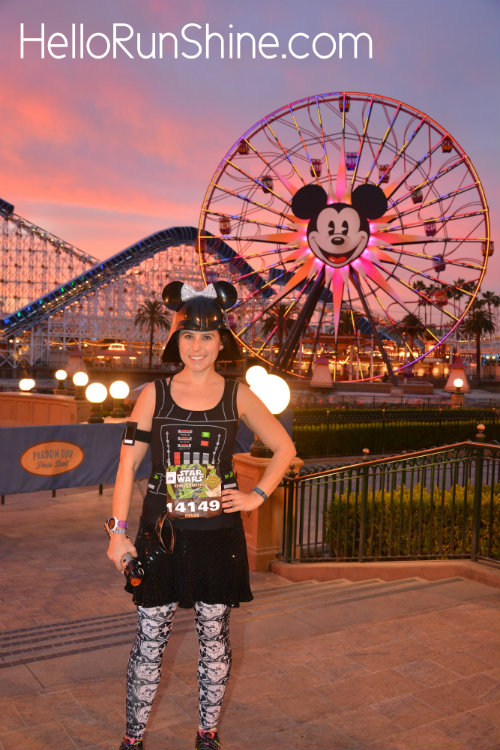 The race fell on President’s Day weekend, so between the increased volume of visitors, runners, and volunteers the parks were packed on Sunday afternoon. We had just enough energy and patience to ride a few favorites in California Adventure and watch the parade in Disneyland before heading out. All in all, it was a perfect weekend. Other than getting our hotel reservation early so we don’t have to switch rooms mid-stay I wouldn’t change a thing for Star Wars 2016. Well, maybe one thing… #EMPIRECHALLENGE 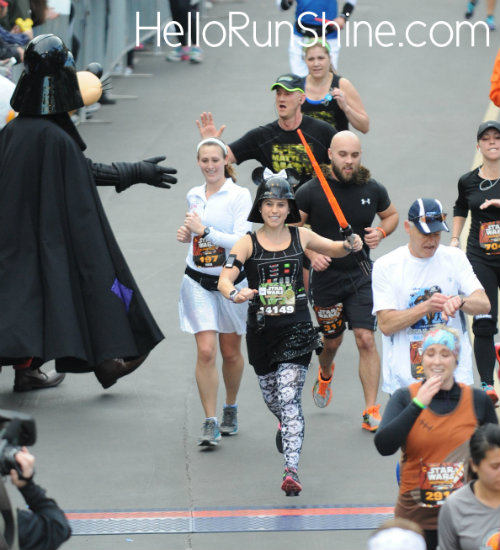