Boy that was a long blogging break! I can’t image why the hiatus…

In order to get caught back up I will be writing very brief race recaps from the past six months. There are quite a few, due to the fact that late-pregnancy boredom found me registering for aaalll the races. Currently I’m back to my pre-pregnancy weight and fitness level and feeling pretty strong. So for fun, let’s start the recaps back in January when I had just barely started running again after the birth of my second daughter.

I was extremely nervous to run a half just eight weeks post-partum. Even though I had started walking the week she was born and running at four weeks, it was a far cry from a standard three month training cycle. I was very thankful that I had signed up for just the half marathon instead of the challenge. Getting away from a newborn for 24 hours would be challenging enough.

I chose a simple, conservative costume that hid the fact that I still had almost 30 extra pounds hanging around (fun fact: I gained 50 pounds in each pregnancy). Other than the headband, all of my gender-bent Han Solo pieces were store bought.

To be honest I don’t really remember the race other than the relief of crossing the finish line (legacy status: maintained!). What I was most proud of was the social steps I took that weekend. I overcame some shyness and introduced myself in person to a group of runners I have come to know over the past year through a runDisney Facebook page. I had a great time hanging out with them in Corral A before the race and meeting up for drinks and rides in the park afterwards. Our small group grew throughout the day and cumulated in an epic inaugural meet up of the Storm Trooper Crew (more details about the Crew coming in a future post). 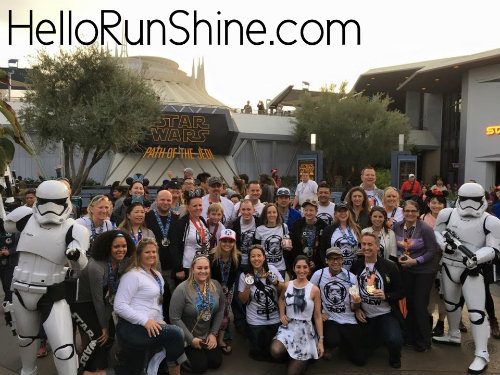 I couldn’t have been happier with the result of my first post-baby half. I felt like the effort to stay active during my pregnancy made finishing possible. And just a few weeks into the year I had taken great strides towards my New Year’s goal of saying “yes to friendship and adventure”. It was a great start to 2016!